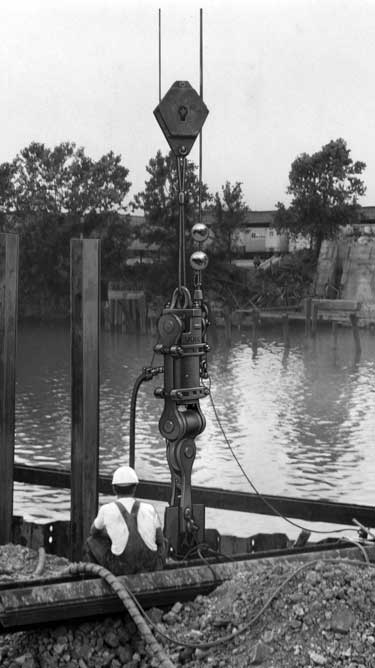 The extractor uses a simple, valveless design where the ram is thrown upward by the incoming steam or air. It strikes an anvil located in the top of the machine. The impact force is transmitted through the side bars to the cross pin and onward to the connecting links.

Although it could in principle be used to extract any pile, Vulcan pile extractors were primarily used with sheet piling, as this type of piling is very common in temporary works. An example of this is shown at the right. The main method of connecting the extractor with the piles was through the two bolts that passed through the connecting links and the corresponding holes in the sheet piling, which the sheet pile supplier would commonly drill or burn in the sheeting.

In some cases the holes could be avoided by the use of Heppenstal tongs, which are similar in principle to the grips seen on impact-vibration hammers. Vulcan also developed and patented its own pile grips as well.  (Other methods of securing the pile to the hammer during operation are here.)

Vulcan’s main competitor was the MKT “E” series, which were very similar in construction. Vulcan got something of a drop on MKT when it introduced the 1200A in 1954, which was larger than any of the MKT models.  In the 1960’s Vulcan marketed the Nilens series of extractors, which featured a cable wrap system for transmitting the impact along with a Heppenstal type grip.

Impact extractors represented the best way of removing sheet piles until the 1970’s, when the vibratory drivers took over the job. However, for smaller jobs where there were few sheets, or jobs where the sheets were embedded in very hard soil or the interlocks rusted or beaten together, the impact extractor remains a useful tool for removing sheet piles after their job is done.

Vulcan extractors were produced in four sizes; specifications are below.

Additional information on them is in the Vulcanhammer.info Guide to Pile Driving Equipment, which includes specifications and shipping data. Volume II of this guide contains the field service manual for the Vulcan extractors. 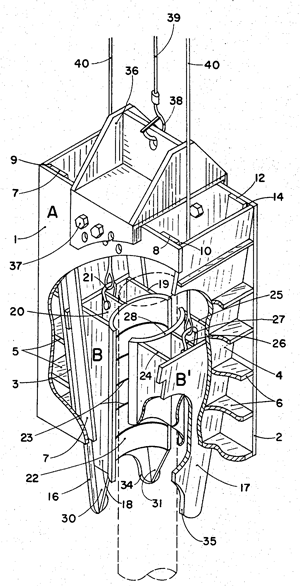 Although the extractors were capable of pulling a wide variety of piling, both the bolted connection and the Heppenstal type clamp were unsuitable for any kind of “displacement” pile, and that included wood piling.

To address this issue, Vulcan licenced the design for the Wood Pile Puller. To the right, a diagram (from inventor Wayne de Witt’s U.S. Patent 3,534,996) shows that the puller was connected to the extractor through the top plate, then basically trapped the head of the wood pile between the jaws. The jaws rode on tapered plates; as the extractor went up, the jaws’ grip tightened on the wood pile, after which the extractor was started and the pile was removed. The Puller could also be used with a straight crane pull in place of a choker (as is shown at (39) in the diagram.)

Once the pile was extracted the two cables (40) were tugged, the jaws freed (in theory!) the puller separated from the pile and the puller was then taken to the next pile.

The Puller was produced at the West Palm Beach facility. The replacement of impact extractors by vibratory hammers ended the need for the Wood Pile Puller.

11 thoughts on “Vulcan Pile Extractors, and the Wood Pile Puller”