From the late 1880’s until the end of the “Roaring Twenties,” Vulcan prospered with its Warrington-Vulcan steam hammers, supplemented by the California hammers.  However, as steam was making its exit as the prime mover of construction equipment, it became evident that the Vulcan product line needed some upgrading.  This is a survey of some of the designs under consideration at Vulcan in the late 1920’s and early 1930’s.

Above: the 16M hammer, James N. Warrington’s concept of a “new Vulcan hammer.” This hammer incorporated a number of innovations: “16M” meant a 16,000 lb. ram, in this case with a 30″ stroke. This type of configuration was more suitable for large concrete piles; the hammer is possible intended for Raymond. (It’s interesting to note that the justification of short strokes for hammers, i.e. minimising tension stresses and cracking, would be illuminated by D.V. Isaac’s pioneering work on the wave equation, taking place about the same time as this design.) The larger hammer represented another move towards higher energy products after the abortive “00” hammer (although Raymond stuck with the traditional Warrington-Vulcan design right up to the 8/0 hammer, with its 25,000 lb. ram.) The hammer is completely keyless. Vulcan used tapered keys for its rams (to connect the piston and ram) and columns (to hold the cylinder and base together.) Keys were reliable but a maintenance item. The closed type differential hammers followed through on this, but Vulcan did not begin to eliminate keys on its other hammers until the 1960’s. An Acme type thread was used in place of the stepped end of the piston. Unfortunately this never was produced. An anvil-type interface with the driving accessory was incorporated. This passed out of the product line with the closed-type hammers. The ram is enclosed, but not the rest of the hammer. 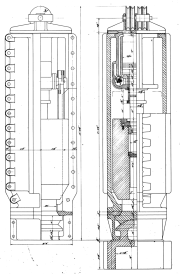 Further refinements take place with this 16M “double-acting” hammer. Note the interesting interface between the piston and the ram.

The action returns to Chicago with this single-acting proposal (it had a differential-acting counterpart as well.) This model was a “6M” with a 6,000 lb. ram. The anvil is refined and the hammer is completely enclosed. Ultimately Vulcan opted for the differential-acting hammer. One advantage of the closed type hammer was underwater operation. For the most part Vulcan left this part of the market to MKT and ultimately the hydraulic impact hammers. 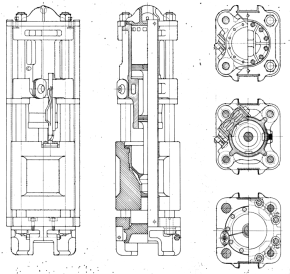 A 5000 “open type” hammer. As noted elsewhere, the closed type hammers were expensive and the ram could not be seen during operation. This hammer is also keyless, incorporating column rods. Vulcan eventually developed an aversion for column rods, while its competitor MKT did not. Raymond eventually solved the problem with cable ties.

There was action at the small end of the product line too, with James Warrington’s design of this “4C” hammer (400 lb.) ram. The California series of hammers used a sliding valve, which was tricky to manufacture. This one used a rotary valve, which was incorporated on the DGH series hammers after World War II. 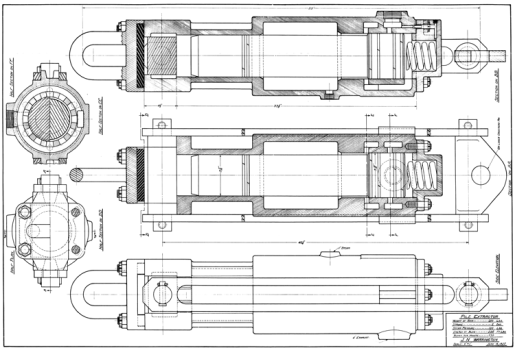 James Warrington’s original design of the 200 extractor. With some modifications (especially the more substantial side bars) this became Vulcan’s extractor design.

A variant extractor, featuring a Warrington-Vulcan type of valve mechanism. Mercifully this was not put in the product line, and James Warrington’s valveless design was standard for the forty years the impact extractors were produced.

4 thoughts on “A Product Line in Transition”