Vulcan relocated its executive offices to West Palm Beach, Florida, in June 1964. To begin with they rented space at 4303 Broadway Avenue in West Palm Beach. Two years later, in late June 1966, Vulcan opened its own office at 2725 N. Australian Avenue, West Palm Beach.  The architect who designed the office was Robert H. Braido.

The manufacturing facility remained in Chattanooga. Today, with email, next day courier service, videoconferencing and collaborative web work, its easy to envision the operation of a company this small and this far flung at the same time. However, in 1966 Vulcan had to use the postal service, expensive long distance phone service, telex and a very slow fax (sometimes) to communicate. The fact that Vulcan ran as smoothly as it did is a tribute to the way in which the company was managed. Vulcan was managed from the Australian Avenue office through many of its years in the offshore industry, which was an is an international business.

To celebrate the opening, they held an open house. Below are some photos from that event. 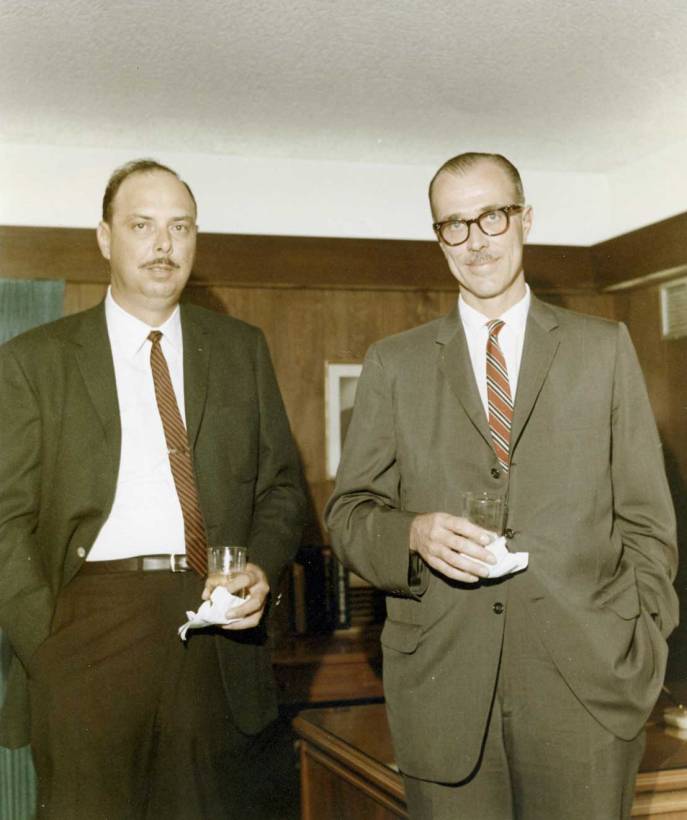 Ken Wiggs of Wiggs and Maale Construction, which built the office, is shown at left with Henry G. Warrington, Chairman of the Board and President.

Lou Venture, president of Tech Steel and Alloy in Chicago. Tech Steel was a major supplier for Vulcan and Lou a family friend; he served on Vulcan’s Board of Directors in the 1970’s and 1980’s.

The hosts and the guests at the open house. My father, Henry Warrington, is fourth from the right, and to his right is Vernell Warrington, Sam Karrh and his wife. Sam was Vulcan’s Sales Manager in the 1960’s and 1970’s.

Henry Warrington at his desk. Behind him is his father Chet’s photo. Chet left a spacious legacy which was hard to escape from. 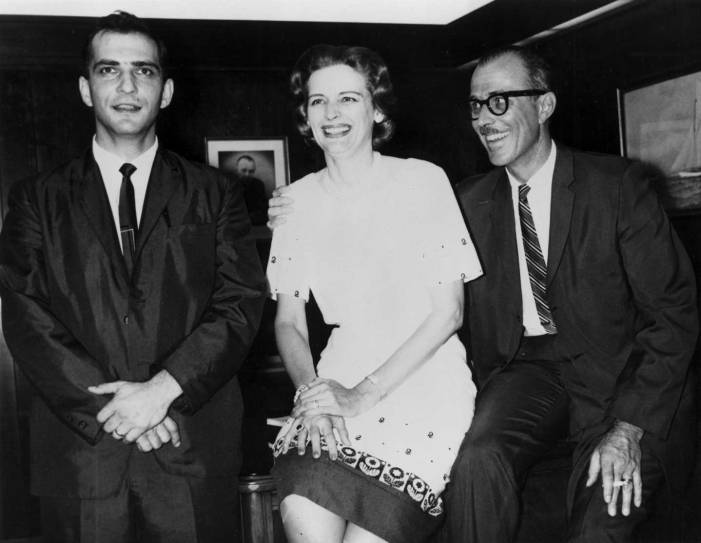 Donald Lamsey, Executive Vice President, is shown at left with Vernell S. Warrington, Secretary (and later Chairman of the Board) and Henry Warrington. With the departure of the executive offices, Lamsey was the operations manager of the Chattanooga manufacturing facility. 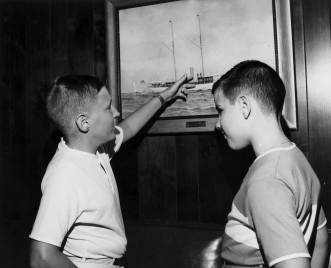 My brother Pem Warrington is trying to explain to me about the steam yacht Thistle, built by our great-grandfather George Warrington. We were very conscious about our nautical heritage, but it was the aviation heritage which first brought the family to South Florida. 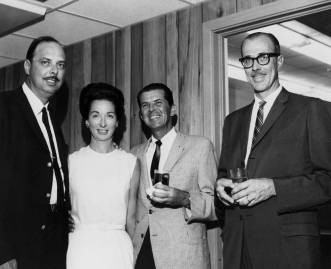 Ken Wiggs of Wiggs and Maale and his wife on the left, with my father Henry Warrington on the right.

Looking through the receptionist’s window into the secretarial pool office. Behind the glass, facing right and holding a drink is a very young Pem Warrington, later Executive Vice President, who would “office remotely” from the Houston facility from 1978 to 1992. He is taking with Capt. Jim North, whose nephew Bob would work as a sales manager for Vulcan in the 1970’s.

Myrtle D. Warrington, Henry’s mother, who maintained a place in the company after her husband Chet’s death in 1961. 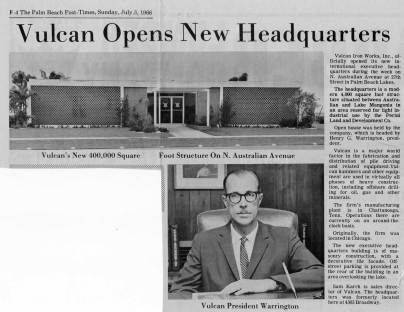 The 3 July 1966 article in the Palm Beach Post-Times about the Australian Ave.’s office opening

Some photos of the office itself.  Most of these were taken by Sam R. Quincey of West Palm Beach, FL.

The office with the adjacent property. Note how empty the area is; the office “pioneered” the area. There’s not much empty space left in South Florida, something people who grew up in “the day” lament.

A close-up of the front door.

The back side of the office. My father’s office was on the right, with its view of Lake Mangonia. That large plate glass window was one way thieves would get in, a more common occurence in high-crime South Florida than one would like to think.

The office in 1971, still well kept up, but the plants relentlessly growing. This photo was used on Vulcan’s 1971 Christmas card.

History is full of ironies and the fate of this office is one of them. This office was closed and the building sold when the executive offices were reconsolidated (in part) to Chattanooga in 1978.