By the late 1950’s it became evident that the Chicago facility was no longer adequate for Vulcan’s expanding business, both in terms of volume and size of equipment. In addition, both the plant, its location and the company’s labour situation built into the company’s financial picture costs which were increasingly difficult to bear.

At the 29 December 1959 meeting of Vulcan’s Board of Directors, President H.G. Warrington gave a lengthy report recommending that Vulcan Iron Works Inc. be moved to Chattanooga, Tennessee after 108 years in Chicago. Some of his observations were as follows, with a few notes of my own in parentheses:

Fundamentally, the most compelling motive for the move is that of economics. The saving of corporate expenses in significant amounts is, in itself, sufficient provocation to justify moving the Company…

I am advised by the State of Tennessee Dept. of Employment Security that there is a continuing supply of personnel for our needs in the classifications that we need. At the time I checked, there were more than enough open applications to fill every category at least twice…

At the present time, this land lies outside the city limits, but, I am advised by Mayor Rudy Olgiati that by the time we could effect a move, this area will have been annexed by the city… (Note: it took a little longer than that, and Vulcan actually supported annexation, an explosive political issue than and now in and around the City of Chattanooga.)

It is understandably difficult to make the decision to move a Company that has been located in one place for more than a century. First, consider that, for all practical purposes this move should have been made many years ago. I cannot speculate on the reasons why it was not effected because I was not present, but the mere fact that it was not done does not change the fact that it should have been done.

Essentially, this decision must be based on the patent economic factors that confront us. I am not naive enough to think that eventual wage rate and tax rate equalisation will not take place, however, this equalisation will also not take place over night. Consider, however, that as wage rates rise in the Chattanooga area, so will they rise in the Chicago area. I may be wrong but it is my considered opinion that this equalisation will not transpire for some ten years. (Note: he was wrong, both wages and taxes are still lower in Tennessee than Illinois after a half century, especially vis a vis the Chicago area.) At this rate, the advantages of the move will have time to pay for the plant and the move. Whether we like it or not, we must face one set of blunt facts. As a manufacturer, we must of necessity, conduct our business in a climate that is conducive to efficient manufacturing with a resulting profit. It is not peculiar to us, but we all know that in the past decade it has been increasingly more difficult to make a profit. The cost of doing business has become our greatest problem. The only answer is to find a business climate that is conducive to profit making. Do not construe these remarks as an indication that I would propose moving every time there is a change in the business weather. I do think, however that there is better weather in other places besides Chicago…

If it is the decision of this Board not to move the Company, I can readily visualise the expenditure of funds in low and medium six figure amounts to make necessary changes in our Plant to bring about changes in our Chicago Plant to yield a more efficient and profitable operation. The study in depth of our Chicago operation has yielded some interesting and alarming facts, which, if gone in to and rectified would cost a great deal of money. It would seem to me to be a great error on our part were we to spend large amounts of money on a building, the newest part of which is more than 50 years old.

I, personally advocate this move for many reasons; both personal and, more important, business-wise, mainly because it appears to me that in many ways this move may be the catharsis that this old Company needs.

The Board responded by authorising the purchase of the lot at Riverside Drive and Stewart Street in Chattanooga. (The formal address for it is 2909 Riverside Drive, Chattanooga, TN 37406.)  Vulcan thus became one of many American companies to relocate from the “Rust Belt” to the “Sun Belt.” (For a more political view of this move, click here.)

Construction on the plant was started 20 May 1960 and was completed 24 October 1960, on schedule. The operation was moved shortly thereafter. 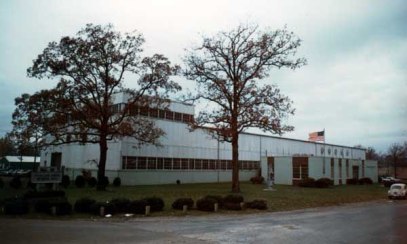 The Chattanooga plant as it looked in November 1968. The high portion on the left was the main assembly area; the offices were at the right. By the end of the 1960’s the requirements for the large offshore hammers had outstripped both the plant’s ability to assemble the units indoors and Ross Meehan’s ability to pour large enough castings, starting a long trend of outsourcing. Nevertheless the Chattanooga facility remained a well organised and neat production facility until it was sold to Roadtec in 1999.

The first Vulcan 560 hammer, at the Chattanooga facility in 1973, with some of the employees. The 560 was Vulcan’s first 5′ stroke hammer; it was immensely successful and become the most important hammer in the Vulcan offshore line, and its introduction was a major step upward for Vulcan. 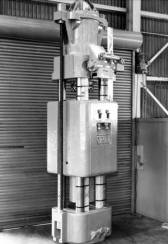 A Vulcan 030 offshore hammer, ready for shipment. This hammer sports what is probably the best ram key retaining system Vulcan used, i.e., the set screws visible under the ram keys. Also visible is the Vari-Cycle out front of the steam chest on the cylinder. Generally, Vulcan mounted the Vari-Cycle so that the cylinder would sit flat on top of the steam chest, but in the case of these hammers it was placed at an angle. Also note that the ram is blocked in the middle of the columns, between the cylinder and the base. In the late 1970’s Vulcan changed this procedure so that the ram was pushed to touch the base and blocked. Although it moved the centre of gravity of the hammer towards the base, it also enabled the hammer to be set upright without having to block the ram first.

The deed is done: the announcement in the October 1960 issue of Contractors and Engineers. Other reasons the plant was located in Chattanooga were to put the company near a source of skilled labour (albeit one with a penchant to organise trade unions; Vulcan’s bargaining unit was initiated in 1962, about eighteen months after the plant opened) and near a source of both iron and steel castings, mainly the Ross-Meehan foundry.

Making the final touches on the 560 hammer. The hammer is held together with cables and these are tensioned with a hydraulic tensioning device, which is being pressurised.

Vulcan’s Chattanooga facilty was staffed by a loyal and consistent workforce. In this photo Chairman V.S. Warrington (left) and Vice Chairman D.C. Warrington (right) present a service award to bookkeeper Linda Grant in the early 1990’s. Linda went on to work for the Tennessee Corporation after they acquired Vulcan in 1996, and for Vulcan Foundation Equipment after they acquired the product line in 2001. Her days at Vulcan only ended when VFE left Chattanooga altogether in 2005.

To the left, the assembly area, and the office to the right.

A pedestal driving head, on the floor at the Chattanooga Facility. 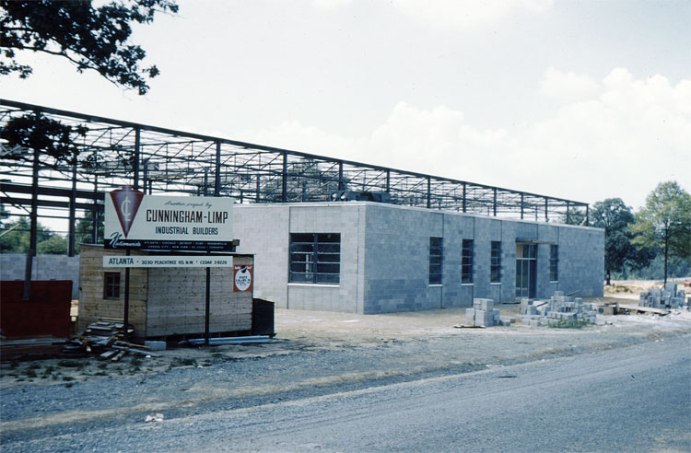 The Chattanooga plant under construction. Below is the office, with the assembly/machining/warehouse bay behind it. Cunningham-Limp was the designer and contractor; they designed the plant expansion twenty years later.

Looking down the machining bay, flanked by the crane rails. 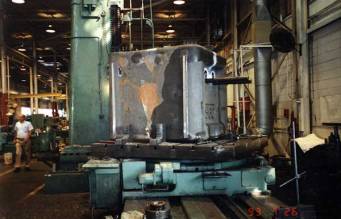 A Vulcan 560 ram being machined by the Giddings and Lewis “floor” horizonal boring mill in 1993 (probably for Hyundai.) Boring mill capacity was the most important machining capability of the Chattanooga facility, as it was the hardest to procure elsewhere. Strolling down the aisle at the left is John Gourley, Vulcan’s last plant manager for the 2909 Riverside Drive facility. He combined an affable nature with a superb command over manufacturing processes and costs to be the best plant manager Vulcan ever had at the Chattanooga facility.

A view down the main aisle of the Chattanooga facility in 1968. The boring mills and larger lathes were to the left of the aisle; the smaller machines and the stockroom were on the right. The photo is taken from the assembly area; the shipping area is at the far end.

A Vulcan 030 secured for rail shipment. Rail shipment was common in the 1960’s and 1970’s, but the railroads’ concentration towards containerised and bulk freight from the 1980’s onward made the shipment of hammers impractical. The hammer had to be well secured to the car; rail car handling can be rough.

An 020 hammer on the truck, getting its final inspection before shipment in 1977. This particular hammer is for the French concern ETPM; its final destination was the United Arab Emirates. As rail shipment became less viable and trucks were able (and allowed) to carry larger loads, truck transport–either of entire hammers or of parts–became the norm, although with the weight getting a hammer through the permitting process was sometimes an ordeal.

A Vulcan 340, standing in the assembly area, ready for shipment in 1973 to McDermott Offshore in Amelia, Louisiana. It is interesting that the last offshore hammer Vulcan Iron Works produced was a 340 for the Venezuelan organisation PDVSA in 2000.

One of Vulcan’s horizontal boring mills machining an offshore hammer base. Vulcan’s boring mill capabilities were key to its ability to manufacture these hammers, as they were scarce, even in a country with the industrial capabilities the U.S. had at the time.

Vulcan’s smallest vibratory hammer, the 200 (later 400) in the shipping department at Vulcan’s Chattanooga facility, August 1987. Behind it is a good view of the original shop.