As we noted elsewhere, Vulcan was an innovator from the beginning of the air/steam line in the 1880’s until the end of the Illinois corporation and beyond. Unfortunately, from the mid-1990’s on, Vulcan was unable to take its ideas and put them into reality. An example of this is the Sea Water Hammer. But there were other projects in the works; below are just a few of them.

Vulcan had plans to directly incorporate cable versions of all of these hammers, but ultimately developed 5′ stroke versions of them, incorporating Raymond features both from existing Raymond hammers and from those which they were unable to bring to reality. The “flagship” of this line was the 525, featured at the right. It was a 5′ stroke version of the 8/0, albeit with a single piece ram. It would have incorporated a 125 ft-kip hammer into a 37 kip machine.

Below are links to the general assemblies and specifications of this series of hammers:

Interestingly enough, Vulcan’s last new production hammer model was the 5110, which “did a Raymond” by putting a 110 kip ram into a 560 frame. This hammer was delivered to Global in 1996 and has been successfully used offshore. 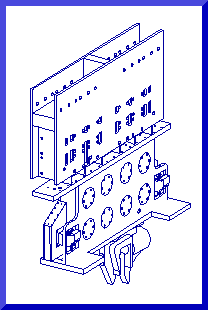 In 1994 Vulcan put together a design for a successor for the 4600 hammer. It was intended to compete in the larger vibratory market, especially for the driving and extraction of casings for drilled shafts. It was also suitable for driving larger sheet piling projects as well. The result of that effort was the 488 hammer; a view of the exciter is shown at the left. It included many of the features of the Foster vibratory hammers that Vulcan was producing at the time.

The 400 and 1400 vibratory hammers, the first high frequency vibrators produced in North America, were introduced in 1987 and 1988, respectively, and both were successful models. Both, however, had their limitations. Both were long hammers, and although they could get into tight places, low centre-of-gravity vibros are easier to handle. Moreover neither hammer was really suited for excavator mounting and downcrowding.

The 400A addressed these concerns and became a successful hammer. In 1997 a preliminary design was drawn up for the 1400A, shown below. Unfortunately Vulcan abruptly discontinued all work on vibratory hammers after this. Click here for more information on this hammer. The design has since been completed by Pile Hammer Equipment for its excavator mast.