The Vulcan 400C and 600C were the company’s “final frontier” on the Super-Vulcan hammers.  It invested a considerable amount of resources in the engineering of these products, both offshore and (in the case of the 400C) onshore.

Promotion wasn’t lacking in the specifications either, as can be seen below. 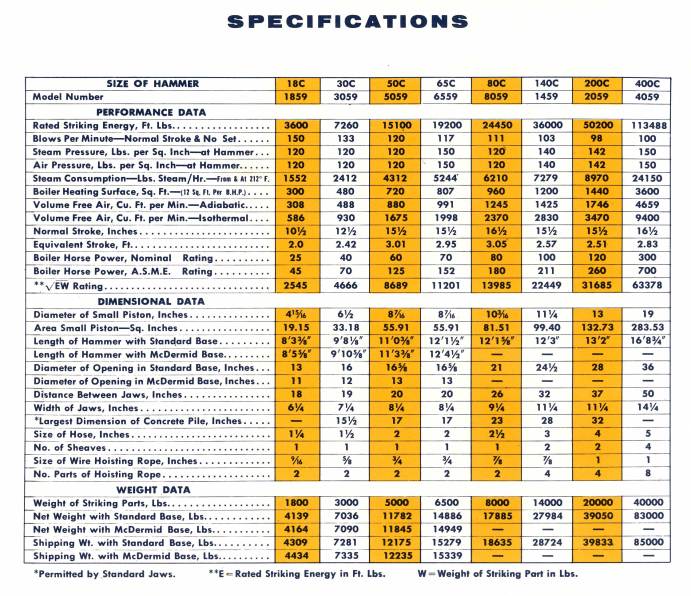 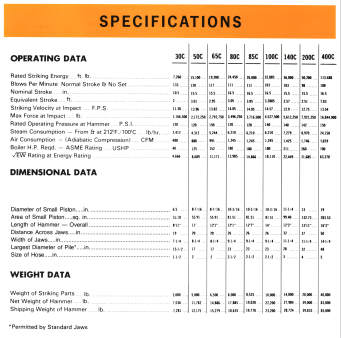 For the onshore hammer, demand for hammers this large onshore only came on Vulcan’s “radar screen” in the mid- and late 1960’s, and by that time the offshore market was dominating Vulcan’s activity.  There was also the persistent “blow rate” controversy.

For offshore, on paper a differential acting hammer made perfect sense.  Hourly barge rates were (and are) high; the more rapidly the work got done, the better.  This probably inspired McDermott to purchase the several 140C hammers that it did.  And the length of the piles was the last nail in the coffin for pile driving formulae; the wave equation and pile driving analysers were taking over.  The energy into the pile could be monitored, as noted in Pile Installation by Pile Driving.

However, there were other issues.  In some cases the pile rebound timed itself to return with the next blow, resulting in the “dancing on the pile” issue Vulcan ran into sometimes with the smaller Super-Vulcan hammers.  Beyond that, the air or steam consumption of these hammers was considerable.  The 600C, for example, used the same boiler size as the 560 with 40% less striking energy.  To penetrate a hard layer, the additional energy was worth more than the higher blow rate.  That could have been compensated for by designing a Super-Vulcan hammer with a 5′ equivalent stroke, but Vulcan never tried to present this to its customers.

It’s yet another “what-if” situation that Vulcan faced in its long history.

One thought on “Vulcan 400C and 600C Hammers: Specifications and Information”