When Vulcan designed its open type differential hammers in the early 1930’s, it developed the single-acting product line from the 014 up from that. Here’s an attempt to “back engineer” the concept onto a classic Warrington-Vulcan hammer: an 06 with a raised steam chest, from the early 1960’s. Mercifully this was never tried, because the longer passage from the cylinder to the steam chest would have only encouraged more core burn-it, as it did with the offshore hammers. 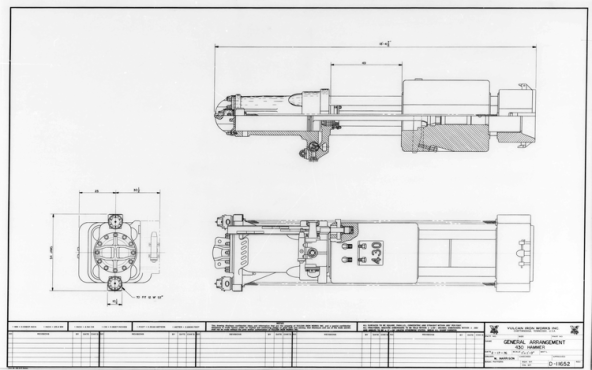 Vulcan produced a fair number of proposed sizes for its offshore hammers. It was frequently difficult to keep up with its customers’ demand for new sizes, in part because the size requirements could change during the development of a hammer size. One hammer that did not get built was the 430; this drawing dates from 1976. With the 560 five years earlier, Vulcan broke out of the 3′ stroke restriction and never looked back with its offshore hammers. The 430 “split the difference” with a 4′ stroke, a common stroke with some lines of hydraulic hammers. Two years later the 530 (and later the 520 and 535) appeared in Vulcan’s line. One big difference was the cables: this hammer put them to the top of the hammer like the 3′ stroke hammers, while the later hammers went only to the steam chest.

A good idea gone awry: the “810” hammer. The 106 hammer featured removable weights from the ram in order to change the energy of the hammer by changing the ram weight. Here we have an 8,000 lb. ram which could be “up-weighted” to a 10,000 lb. ram. Unfortunately the weights got stuck in the ram, and the concept got stuck in the “round file.”

The 1960’s and early 1970’s saw hammers such as the 040, 060, 560 and 3100 push the Vulcan line to new horizons. Yet, the design was basically the same as the Warrington-Vulcan hammers of the 1890’s. The question then arose: would the design “upscale” indefinitely? This pair of hammers showed that some at Vulcan were beginning to have their doubts. Like the first differential hammers, the 3250 (3′ stroke, 150 kip ram, 450 ft-kip energy) and 4150 (4′ stroke, same ram, 600 ft-kip energy) had a “closed type” construction. Drawing some inspiration from the IPH-16, the hammer employed the “ram in a can” approach, where the ran ran in a tube like the diesel hammers. A protruding rod at the top had a cam for the valves, which were actuated by rods similar to Raymond’s 150C hammer. The ram was connected to the cylinder using the Warrington-Vulcan type connection (as opposed to the Super-Vulcan type connection) but rods were wedged into place to hold the connection together. The new Hydra-Nuts and cables were used to hold the hammer together. Patented in 1974, Vulcan presented the hammer to some of its customer base. So why did they not try this? McDermott, with the memory of the IPH-16, was probably unenthusiastic about a new style hammer this large. And the size may have been the key issue: going to a new concept with this size hammer may have been off-putting in general, better to stick with the “tried and true” design. That’s what Vulcan did with the 5100, but had this or another different approach been tried with the larger hammers, many of the difficulties Vulcan ran into with them may have been avoided.

An attempt to expand the DGH hammer line was the DGH-500. The California series of hammers had at least three active sizes, and this was an attempt to match that, from 1971. Unfortunately the popularity of hydraulic tools made life hard enough for a pneumatic tool like the DGH-100, and with the uninspiring sales of the larger DGH-900, Vulcan opted to let this concept sit. 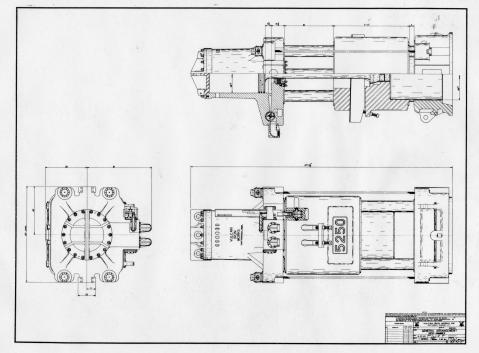 The years of the 5150’s and 6300’s were both profitable (the oil industry was in boom mode) and rough with mechanical difficulties. An attempt to look to the future and address these difficulties was the 5250 hammer, with a 250 kip ram and 1250 ft-kip rated striking energy. The hammer came just as things started to slide downward in the oil industry, and Vulcan never produced another hammer in this size range.

One other set of designs that never saw the light of day were the 514 and 516 hammers, but these are documented here.