The 020 hammer, derived from the 200C hammer, is an important part of Vulcan’s product line.  A big hammer when it was introduced, it was key in making Vulcan a serious participant in the offshore hammer market, and also with larger onshore and marine projects as well.  It was also the progenitor for hammers such as the 520, 030, 530 and 535.

Vulcan 020 driving pile for the first Dodge Island bridge in Miami, FL. This photo graced Vulcan’s Bulletin 68 for many years. 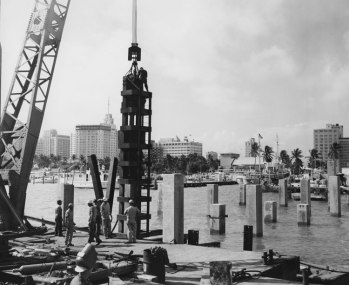 A Vulcan 020 being prepared to drive square concrete piles for the original Dodge Island bridge, 1963. In the background is downtown Miami. Another photo from this job graced the cover of Vulcan Bulletin 68K for the single-acting onshore hammers. Note the use of the “offshore” type stub leader.

An 020 hammer on the truck, getting its final inspection before shipment in 1977. This particular hammer is for the French concern ETPM; its final destination was the United Arab Emirates. As rail shipment became less viable and trucks were able (and allowed) to carry larger loads, truck transport–either of entire hammers or of parts–became the norm, although with the weight getting a hammer through the permitting process was sometimes an ordeal.

The Vulcan Vari-Cycle, again for the 020 offshore hammer. This works by shifting the movable trip (the trip with the arc slot) between two different cut-off wedges, which in turn varies the stroke. Variable stroke is essential for concrete piles to control tensile stresses. For offshore hammers, it is not so critical, which led to the use of “manual” overrides such as the traverse trip. This also shows the outboard bearing bracket, which is necessary for virtually any trip shifting device.

Hammer cables being tightened on a Vulcan 020 hammer. Vulcan was relatively slow (compared to Raymond, for example) in adapting cable ties to keep its hammers together. The demands of offshore pile driving forced Vulcan to make this change. Offshore hammers generally used cast spelter fittings with an anti-rotational tab on the lower fitting as well as the flats on the upper one. A jacking pedestal is first set over the cable and loose nut; then a jacking bar is threaded over the cable fitting and slid through a centre hole jack. The jack is then pressurised and, when the proper tension is achieved, the cable nut is tightened and the tension from the jack released. Offshore crews (especially in the Gulf) disliked this procedure, which led to the development of internal jacks such as the Hydra-Nut (shown below) and Auto-Jack. This procedure, however, is still the preferred way to tighten single-acting onshore hammer cables, providing (as always) the proper safety precautions are taken.

General arrangements are below.  The 020 was originally developed as an onshore hammer (the photo at the top of the page shows one in on the job) with 37″ jaws.  If the hammer had a significant weakness, it was that: the jaws were too small to accommodate more than 30″ concrete pile or 36″ steel pipe pile.

The offshore hammer sported 54″ male jaws and could drive up to 48″ steel pipe pile. 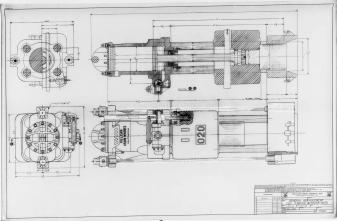 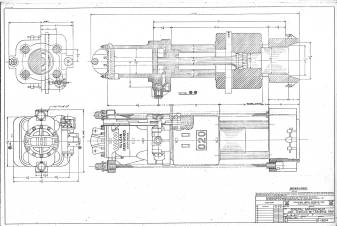 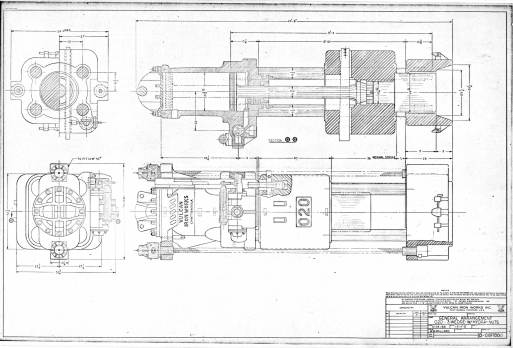 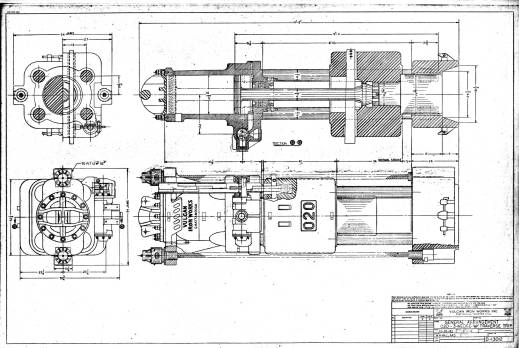 The first offshore 020 was made for Ingram Contractors in 1965.  Many offshore contractors purchased and used the hammers, including McDermott, DeLong, Teledyne Movable Offshore, Fluor and ETPM, along with onshore contractors such as T.L. James, Boh Brothers, Contratistas Costaneros and J.H. Pomeroy. 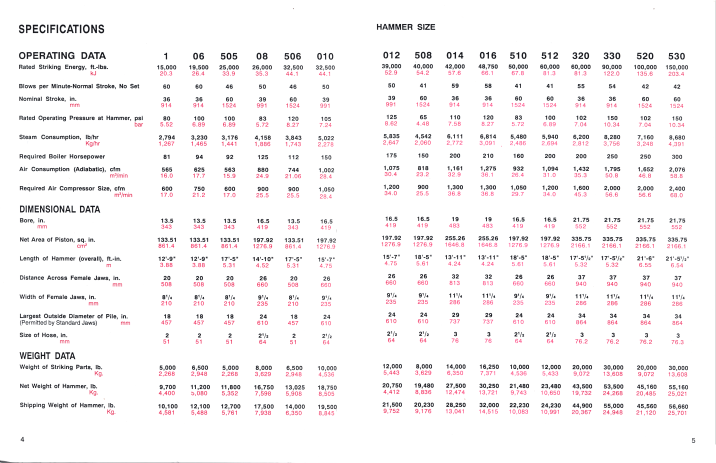 Like the 014 and 016, the 020 wandered between the raised and lowered steam chest design, and also whether the hammer had a steam belt or not.  Steam belts allowed the air or steam to pass from one side of the hammer to another.  For onshore hammers, this allowed the steam chest to be run on the inside of the leaders.  Offshore hammers traditionally ran their steam chest in front (outside) of the leaders, which means that they dispensed with the steam belt.

Vulcan also developed a 320, which had the same rated striking energy but a longer ram to match the 030.  General arrangements and specifications for both onshore and offshore are below.  Both of these had the larger offshore ram point and lowered steam chest. 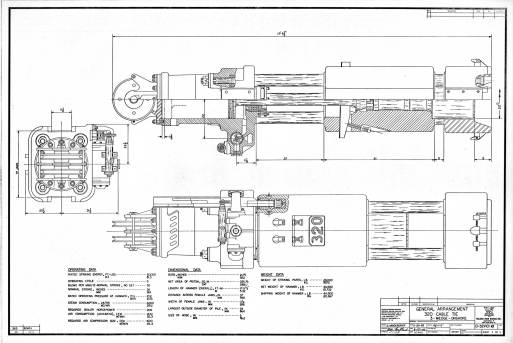 If you have one of these hammers and want to order parts or rehabilitate the hammer, get the serial number and make sure which configuration you’re ordering for.

8 thoughts on “Vulcan 020 and 320 Hammer: Specifications and Information”