It is frequently desirable to ascertain the age of equipment for appraisal, evaluation and a variety of other reasons. As is customary in most construction equipment, we show below the year of manufacture and the serial number range for that particular year. As we approach one hundred years of serial numbers, we will on a yearly basis update this information.

Note: This tip, issued in 1976, was never followed up on; there were never any updates for the offshore tips (there was one in 1977 for the onshore ones; the information from that one is included above.) In fact, by the 1980’s Vulcan took this tip out of its distribution list in fear of people knowing the number of Vulcan hammers outstanding.

However, such updates were unnecessary, because in 1965 Vulcan adopted its final system of serial numbers for hammers. This system gave the year of the hammer’s manufacture without having to consult the factory. All of this type of serial number is in the format of

where “XX” represents the year code in two letters; they translate into the last two digits of the year as shown in the table on the left. Thus, for a hammer with the serial number prefix “GF” this translates into “76”, thus the hammer was made in 1976. The implementation of these numbers can be seen above.

If you would like more information on this subject, or on a specific hammer serial number, you can contact us. 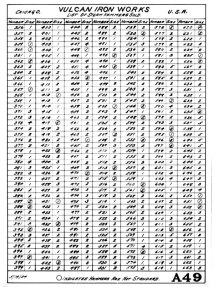 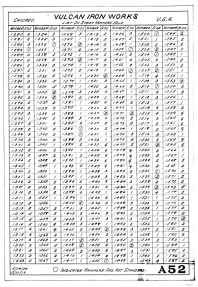