The design of sheet pile walls–and specifically analyzing them from the standpoint of sliding, overturning, and excessive bending stresses–is one of the more challenging aspects of geotechnical design.  That’s because sheet piling are totally dependent upon balancing the lateral earth pressures on both sides of the wall while at the same time insuring their structural integrity.

Simple solutions for the problem are given in texts such as Verruijt and can be analyzed using charts such as one sees in DM 7.02. But real world problems are seldom this simple.  The methodology used to analyze sheet pile walls using “classical” techniques is described in detail in Sheet Pile Design by Pile Buck, and software for that purpose–very useful to simplify the complex calculations from multi-layer soil profiles–is available in packages such as SPW 911.  The expense of this software is easily justified for the practitioner who needs to design these walls in a timely and accurate fashion.

SPW 2006 was developed by Arnold Verruijt and some description of the software is given in the download.  It has several important features that need to be mentioned up front:

When you run the software and open the demo file, you are greeted with something like this: 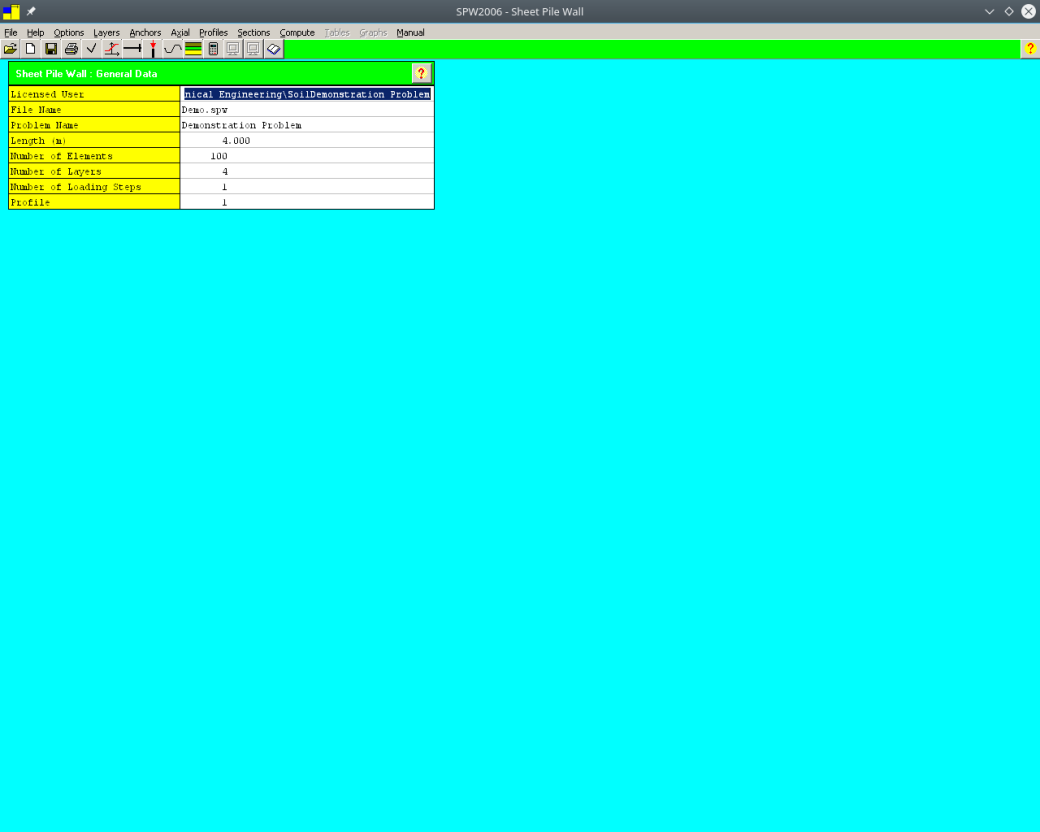 You’ll notice the toolbar on the upper right; the first three are obviously (from left to right) open file, new file, and save file.  Next to that is the print command.  The “check mark” is for the output options: 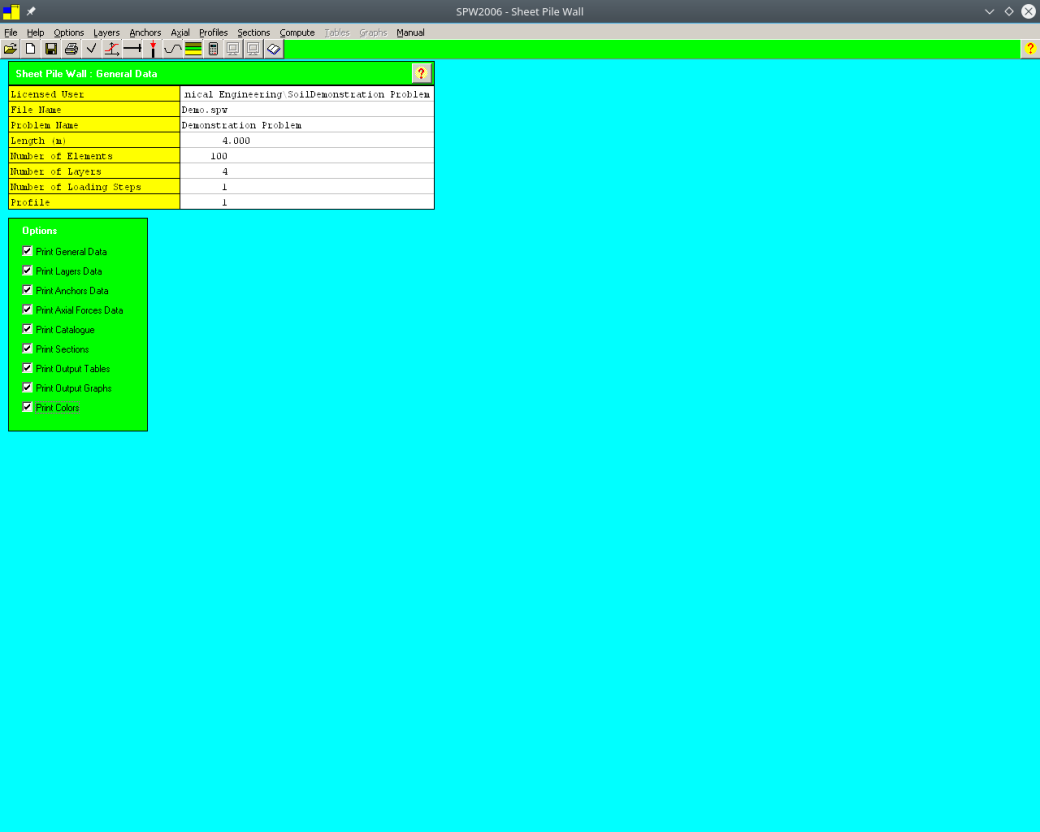 I strongly suggest that all of these be checked.  After that we have the soil layer properties, which come up like this:

And for the right side:

Note that the right side looks pretty much like the original.  The left side’s first two layers have zero Wd (dry unit weight) which is the way you tell the program the layers are “excavated” for a given side.  The “?” mark is the button for online help, which explains the variables, for each of the input tables.

One variable that needs some explanation is the Dw, or “stroke” of the soil.  SPW 2006 incorporates soil-structure interaction (SSI,) which means that the force of the soil varies as the wall moves away (or towards it) rather than the “all or nothing” approach common with classical methods.  We’ll discuss this in more detail with the cantilever wall example.

The next button is for the anchors, we’ll explain those when we get to the anchored wall example.  Unlike some classical software packages, SPW 2006 designs for a non-rigid anchor.  This, it’s necessary to note the maximum allowable anchor force and the displacement necessary to achieve that force.  We’ll explain this in more detail with the anchored example.

After this is the axial force exerted on top of the wall.  Using sheet pile walls for bearing is common in Europe but hasn’t quite caught on in the US.  Provisions for forces at both bottom and top of the sheet pile and a moment at the top of the pile are available.

The last input dialogue box is the sheet pile catalogue.  It contains a selection of steel sheet piling (although the program can certainly accommodate other materials.)  The input of sheet pile section properties is probably the strangest aspect of the program for the following reasons:

The two examples will show how this data is used. 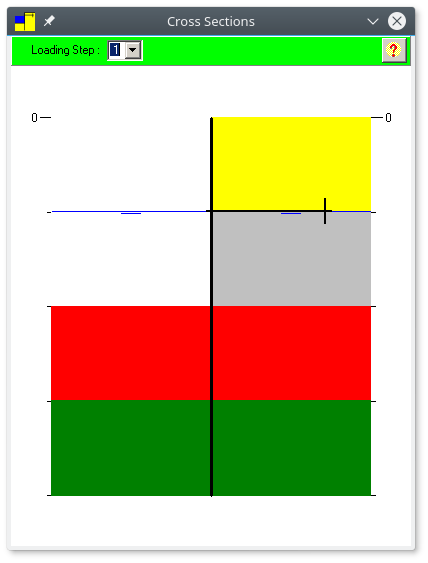 It is important to inspect this before running the program, using the “calculator” button.  It’s easy to make a mistake, especially if you have more than one loading step (i.e., are modeling a progressive excavation, which is a common problem in sheet piling design.)

Unlike more sophisticated programs, it’s necessary to manually increment the pile penetration beyond the dredge line to determine the necessary length of the pile.  You can do this in meter increments, 500 mm increments, or whatever step you would like, but you need to start with a very short penetration beyond the dredge line and increase it until you don’t get a floating point error in the calculations.   This is done by changing the depth of the last layer in the soil profile input and re-running the calculations.

Once you’ve done this and arrived at a pile penetration, you can output the beam results for the sheet piling.  This comes out in two ways: first, tabular: 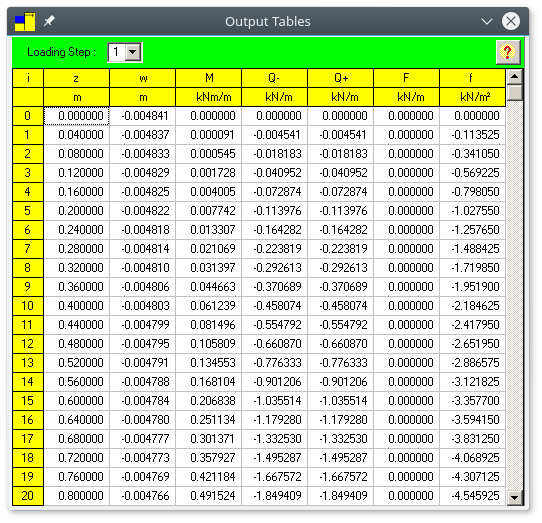 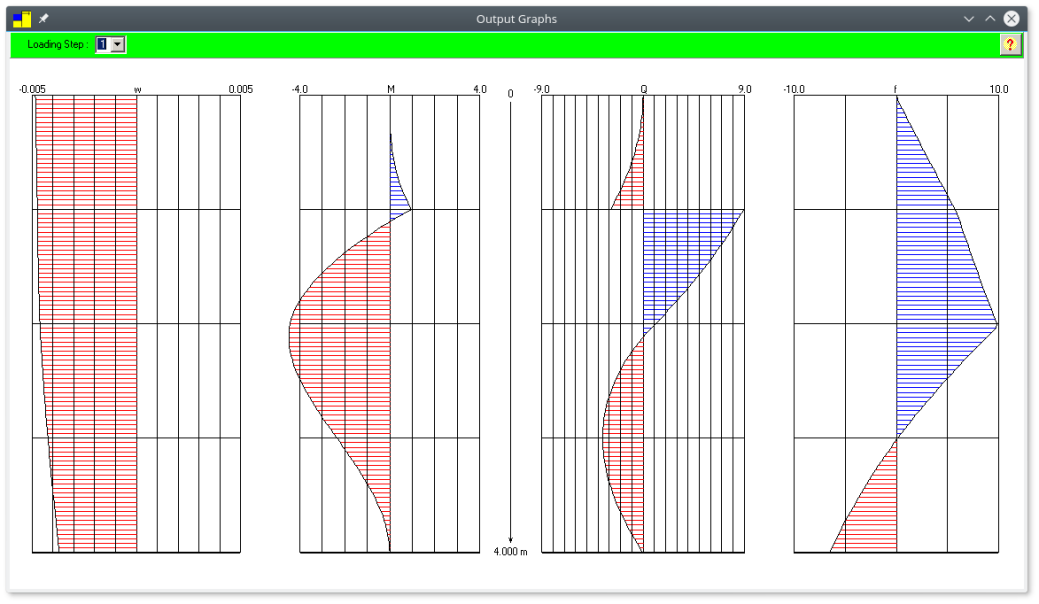 We will discuss how to analyze this data with the cantilever wall example.  The printed output has much more detail than this.