Like the 060 and even more the 040, the 3100 was a major step up for the company.  Even though it became the “gateway” to the company’s largest hammers, itself it was a dead end offshore for reasons that weren’t fully appreciated at the time, at least not by Vulcan or some of its end users. 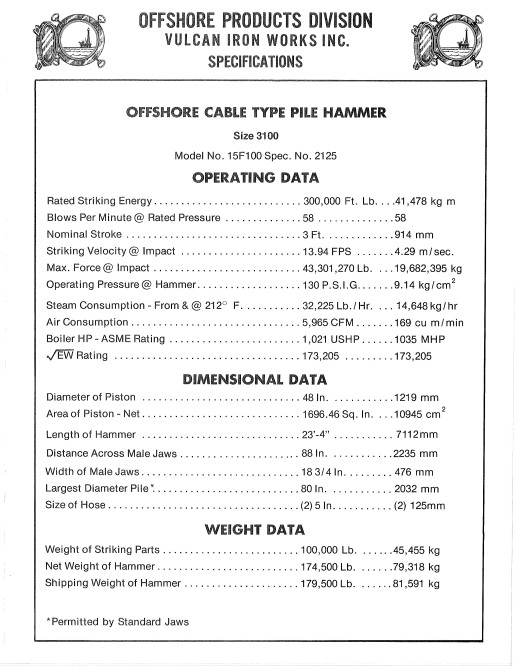 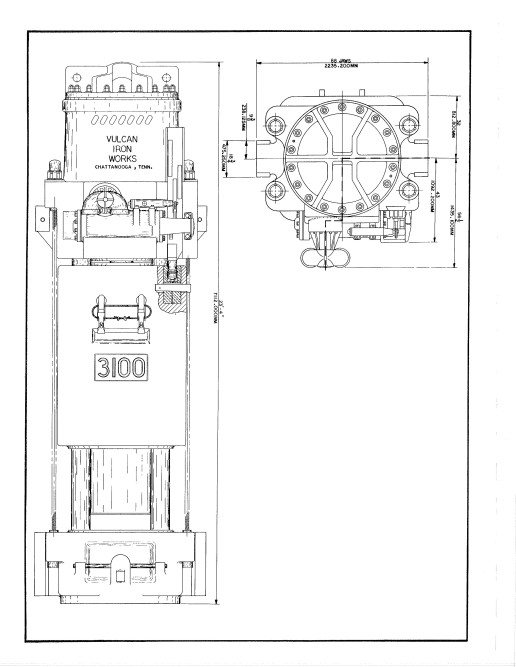 The first 3100 was built for McDermott.  Even though the 560 had been introduced earlier and was lighter for the same energy, McDermott felt that the traditional “heavy ram-low striking velocity” approach was better, and also had the crane capacity to handle this size of hammer.  The hammer was ordered in the fall of 1973.

The road to completing the hammer was a rough one.  That fall was the occasion of the first oil shock, which was great news and bad news at the same time.  It was great news because the oil price spikes made the oil industry very active during that decade and early into the next one.  It was bad news because the demands on the supply chain of foundries and forge shops, coupled with the energy shortages that resulted from the oil shock itself, made lead times immensely long.  And, of course, patterns had to be built for all of the major castings.

The hammer was finally completed on 11 June 1975, but there was another twist: it was assembled on the deck of McDermott’s Derrick Barge 8 in Bayou Boeuf, Louisiana.  Vulcan traditionally preferred to ship their hammers assembled, but freight and delivery issues forced this method.  It was successful, not only making it simpler to ship the heavy hammer parts in pieces, but also to familiarize the end user’s personnel with the hammer itself.  By the 1990’s it became the standard method of delivery for hammers going to the Gulf of Mexico. 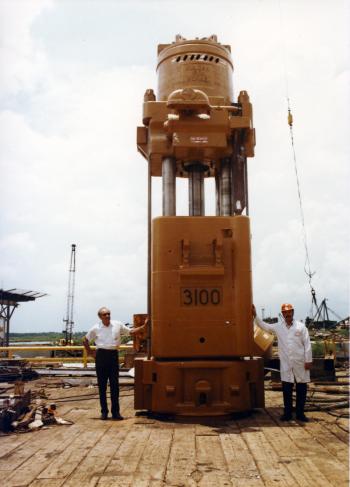 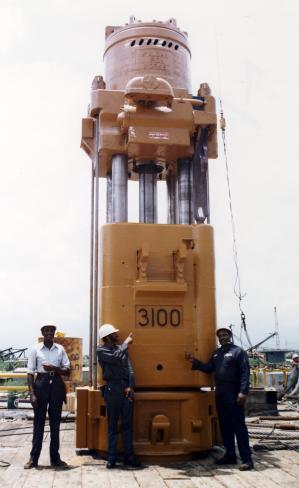 Vulcan brought three of its shop employees to help with the assembly: from left to right, Frank Wright, Sylvester Wright, and Leroy Beverly. 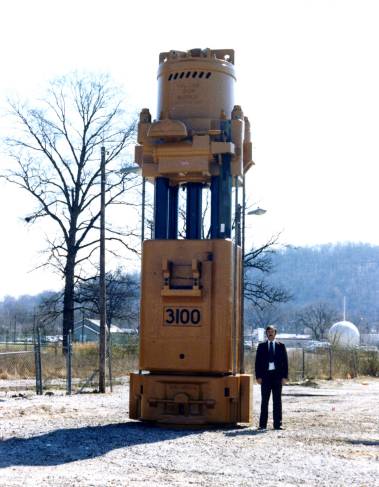 In spite of the success of the 3100 assembly in the customer’s yard, not all of these hammers were assembled in the field. Vulcan’s field service representative, Norris Tremmier, stands next to one put together in Chattanooga.

In spite of its difficult production road, the 3100 was successful from the beginning, with fewer of the “growing pains” that some of the earlier hammers had experienced. 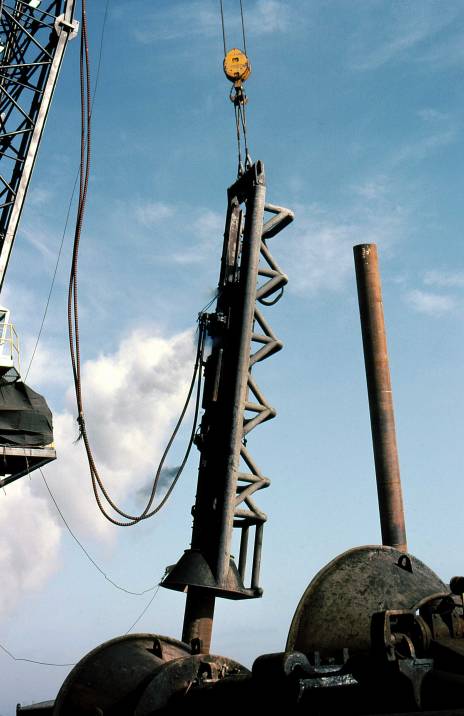 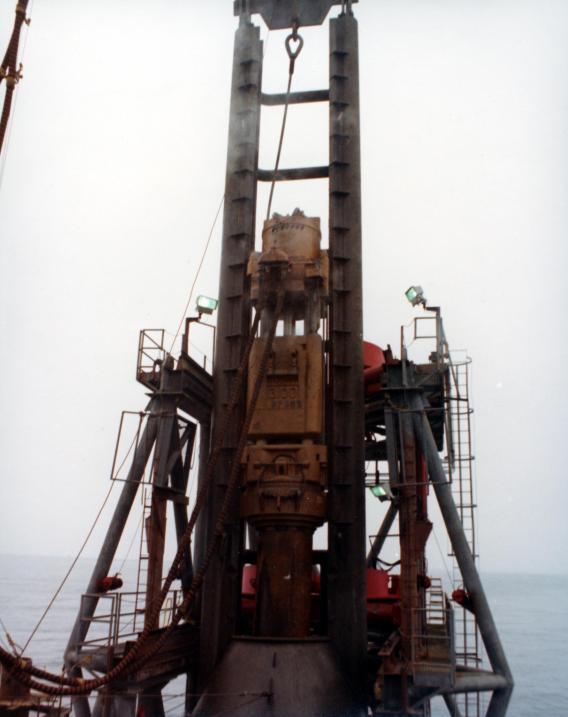 As was the case with the 040, Vulcan used the hammer for advertising purposes, both then and many years later. 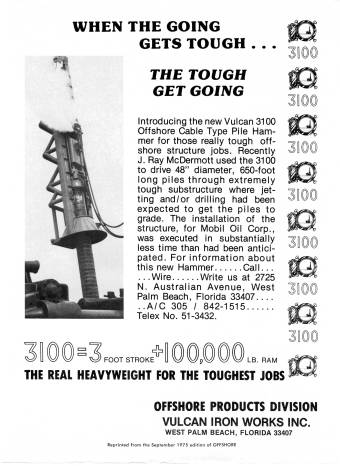 Nixon’s Attorney General John Mitchell gave little comfort when he told his subordinate “when the going gets tough…the tough get going.” The subsequent history of Watergate justified the lack of enthusiasm. Oblivious to this sad history, Vulcan had better success with the 3100, as this ad for the September 1975 issue of Offshore magazine bore out. 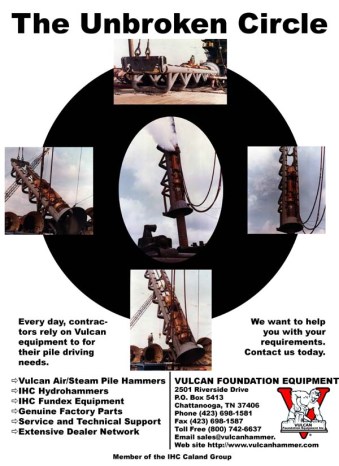 Evoking the hymn “Will the Circle be Unbroken” Vulcan Foundation Equipment, the IHC subsidiary that owned the product line assets through most of the “oughties,” used photos of the 3100 being picked up and driving piles for an ad. 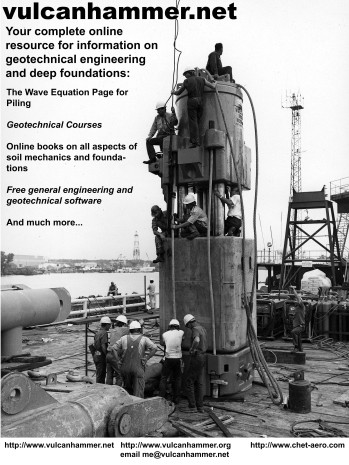 The companion site vulcanhammer.net used this photo, showing the 3100 in the latter stages of assembly on McDermott’s DB 8, in its ad, which appeared in publication such as Pile Driving by Pile Buck. Note that the hammer is big enough so that there’s plenty of room for personnel to stand on top and inside of it.

The general assembly is below (the hammer was so large, it required a two-sheet drawing.) 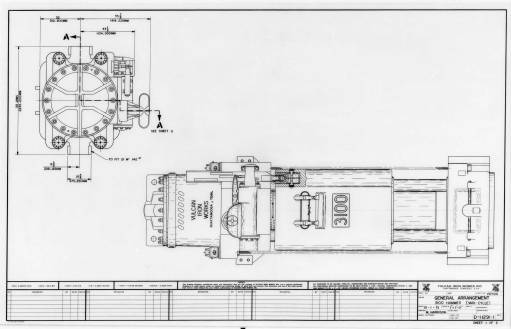 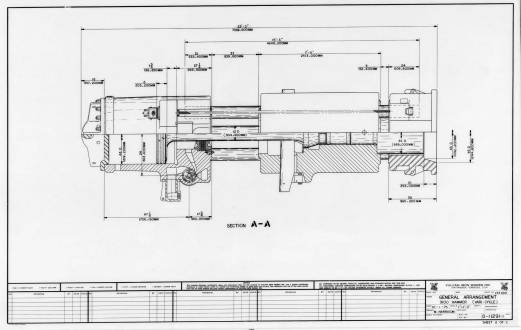 The first was obvious: the 560, virtually the same energy, was lighter and more economical to produce and operate.  The second was that, with offshore high-impedance steel piling, the higher impact velocity, problematic with concrete and wood piles, was actually preferable, albeit harder on the hammer.  The hammer never went much past its origin, in spite of the celebration that surrounded its inception.