In the deep foundations industry, the Warrington family is primarily associated with Vulcan. But for many years, and especially in the half century between 1890 and 1940, a good part of the family was engaged in other activities.

We invite you to visit our companion site Chet Aero Marine which goes into the family’s involvement in the Civil War on the side of the Union, steam yachts on Lake Michigan, George Warrington’s moving to Washington to serve in the Department of Commerce and Labor, his son Chet’s aviation career in the nation’s capital, and yachting that extended until the end of the 1960’s (as shown above.) 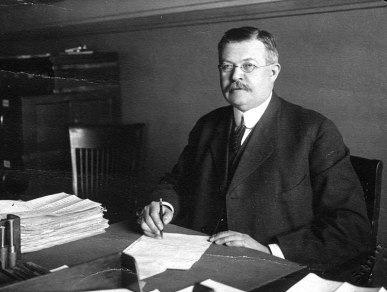 George Warrington (1857-1925.) His Warrington Iron Works produced some of the foremost steam yachts to ply the waters of Lakes Michigan and Geneva in the 1880’s and 1890’s. His yacht building and other activities took him away from Vulcan, a concern with which he was less and less active with. (He was active enough, however, to contribute to and be embroiled in the fiasco of the Caldwell Steam Snow Plow…) In 1900, he was Commodore of the Chicago Yacht Club, a position his son Chester would hold exactly fifty years later. In 1903, President Theodore Roosevelt appointed George as Chief of the Division of Marine Engineering, U. S. Bureau of Lighthouses, Department of Commerce, a post which he held through President William Howard Taft’s administration and into the first half of Woodrow Wilson’s administration. This photo shows George Warrington in his office in Washington. 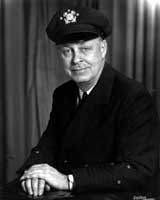 Chester H. “Chet” Warrington, in his uniform as Commodore of the Chicago Yacht Club, which he was in 1950. 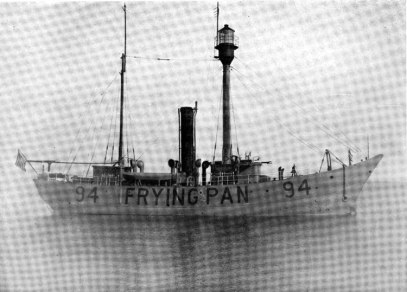 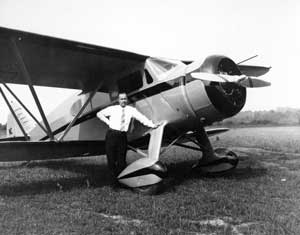 Chester H. Warrington (1890-1961) in front of one his many airplanes, in this case a Waco ZQC-6. Starting with his service in World War I, “Chet” was an enthusiastic aviator, flying all over the U.S. at a time when the technology of the planes, the decidedly low tech navigation available and the lack of paved airfields made flying something of an adventure, one that occasionally ended in a crash, something Chet experienced along with everyone else. He was a member of many flying organisations such as the Institute of the Aeronautical Sciences, the Quiet Birdmen, the United States Amateur Air Pilots Association and the National Aeronautic Association.

Chet Warrington with his two livelihoods, cars and airplanes. The airplane is a Davis, for which he was a dealer. He was also a dealer for Cord/Auburn/Duesenberg automobiles. Photo taken at Congressional Airport in Maryland. 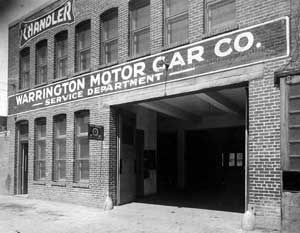 After graduating from Lehigh in 1912, Chester formed the Warrington Motor Car Co., with offices at 2035 17th St. N.W.. It became the Cord-Auburn-Duesenberg dealership in Washington, DC, along with a dealer for Stinson and Davis aircraft. The car line was one of the most exciting in its day, especially the Duesenberg, which was really a “Doozy.” In 1921-22 he was Board Chairman of the Washington Area New Auto Dealers Association. Unfortunately the Depression ended many good car manufacturers, and Cord-Auburn-Duesenberg’s demise no doubt contributed to Chet’s decision to return to Chicago to direct Vulcan in 1940. Chet was also an automotive engineer in his own right; in 1922 he and his father George were granted a patent on “Timing Devices for Hydrocarbon Engines” (U.S. Patent 1,418,996.)

One of Warrington Motor Car’s offerings. Unfortunately selling such cars didn’t always confer the respect in the society of the day. When Chet was casting about for a suitable prep school for his son Henry, the two drove up to the prestigious St. Paul’s School. The headmaster, a stuffy Episcopal minister, made it clear that he didn’t think much of a car dealer’s son gracing his school. Needless to say, Chet had nothing to say all the way home!
Advertisement