Vulcan’s impetus towards pile driving equipment was driven in part by the involvement of the Warrington family in the marine field, both construction and ship building/operation. That commercialisation wasn’t restricted to the pile driving equipment; before World War I, Vulcan was an active builder of dredging equipment, which combined its machinery design and manufacturing capabilities with its shipbuilding ones.

Although, as with all of its products, Vulcan’s market for dredges wasn’t restricted to the Chicago area, that area had plenty of dredging to do with the contemporaneous construction of the Chicago Ship and Sanitary Canal, which reversed the flow of the South Chicago River and provided a waterway between Lake Michigan and the Mississippi River system.

General Arrangement of Machinery for Steam Dredge #1 (Vulcan’s naming/numbering system wasn’t very imaginative, but it got the job done.) The dipper (bucket) at the right swung from the boom that came off of the bow of the dredge, filling itself up with the lake, river or canal bottom soil as it swung.

#2 Dredge for Title Mining & Development Company, Minneapolis, MN, July 1894. Although the steam engines and dipper were iron or steel, most of the hull–and the boom–was made of wood. 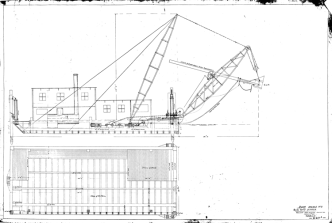 Boom Dredge #2 with a 1 1/2 cubic yard dipper, 6 March 1895. Here the construction is a little different; the boom, like a crane boom, pivoted around a pin at the bottom. A jib allowed the lines to pull on the boom point and raise and lower the boom. The two steam engines which operated the boom and the dipper were mounted directly on the hull of the dredge. Note the elaborate houses on the deck. Vulcan had the capability of building different designs of dredges for its customers, a flexibility it frequently lacked with the pile driving equipment.

Steam dredge for Christie and Lowe Co. Similar in concept to the dredge above, additionally the boom rotated horizontally as well as vertically, thus the plan view in addition to the elevation one. The spuds, which held the dredge in place during operation, are visible at the aft and along the beams towards the bow of the dredge. They were driven in place before work began.

No. 4 Boom Dredge, with a full turntable for the boom. Made for T.H. Watson, Minerva, OH. Note the spud at the aft (left end) of the dredge is “on a batter,” i.e., angled, to provide better resistance to movement during dredging.

A dredge proposal for Schweikart Dredging Company in Detroit, 8 April 1901. This is a two cubic yard dipper, larger than many of those previously shown.

Steam engine for a canal dredge, December 1883. There are two cylinders, one on each side of the engine. Speed was not a major factor in this application. 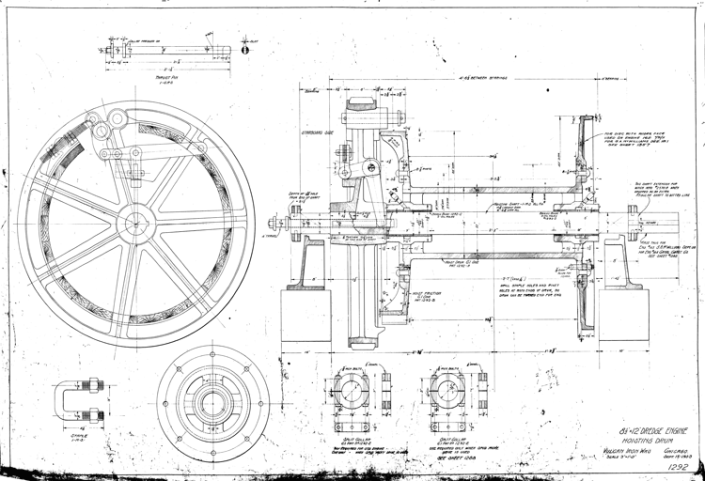 Hoisting drum for an 8 1/2″ x 12″ dredge engine, 15 September 1903. Hoists are an essential part of many construction-related operations, and Vulcan was completely vertically integrated in their abilities with the dredges. It’s unfortunate that Vulcan did not apply this in a more general way; their distributor turned competitor Conmaco certainly did.

A different hoisting drum, namely a differential drum for U.S. Dredge #1, 25 January 1908. Vulcan produced various products for the U.S. government throughout its history, including such things as the Construction Assistance Vehicle.

60′ Bridge Boom for Canal Construction Co., 3 September 1912. Note how the wooden boom is “prestressed” by the cables running through the centre and along the sides of the boom. Prestressing a wooden structure in this way (and this is applied to concrete as well) dates to ancient times, when ropes were used to run a “tight ship.”

Not all of Vulcan’s dredges were used strictly in a backhoe/dipper mode. Below is a clamshell dipper, dated 28 February 1890.

A boom layout for a dredge for Hausler and Lutz, 23 June 1899. Chain, which is prominent in many of the designs above, is completely replaced by wire rope, a technology made prominent by the Brooklyn Bridge during the previous decade. Wire rope would eventually edge out its main competitor, manila rope, for pile driving applications.

4 thoughts on “Vulcan and Dredges”