Field service at Vulcan grew out of its offshore involvement. Up until the mid 1960’s Vulcan relied on its dealers to service its equipment, but the specialised nature of the product and the demands of the application–especially the expensive downtime of an idle barge offshore–demanded that Vulcan keep on call service representatives willing and able to travel anywhere in the world to start a Vulcan hammer or keep in running.

An important adjunct to the field service effort were the Vulcan Tips; these handy tips gave customers important information for the operation of their Vulcan equipment. They remain an important service of this website. Also, the inspection and repair services shown on this page are still available; click here to contact us about this. 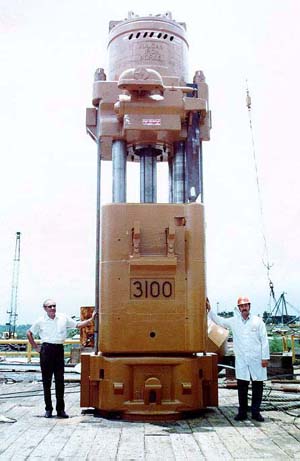 Proud of a job well done: Jesse Perry (left) and Norris Tremmier stand in front of a 3100 hammer they have just completed assembing in a customer’s own yard. The 3100 hammer was the last 3′ stroke hammer Vulcan produced for the offshore market; compared to the 560 with the same energy, it was heavy and drove the piles no better, if as well. Although Vulcan could assemble any hammer in or near the Chattanooga factory, field assembly was practical as the hammer was easier to ship in pieces, and when delivery was tight (which it almost always was) it speeded up the process. It also gave Vulcan’s field personnel a chance to give a service school to the customer’s people. With the demise of practical rail transport and the problems of trucking such a large piece, by the 1990’s field assembly of offshore hammers became the norm.

Vulcan hammers gained their reputation in part because they were simple, thus free from breakdown and repairable to a great extent on a derrick barge with crews that were not full time mechanics. However, there eventually came a time when a hammer needed an overhaul. Vulcan field service personnel spent a great deal of time on these kind of extended repairs, where it was necessary to put the hammer into a machine shop, dissassemble the hammer, clean and recondition the workings, and reassemble the hammer. A hammer with extended exposure to salt water could prove difficult to dissassemble; shown below is a Vulcan 200C getting that kind of treatment in a machine shop in East Asia. Note the use of a jack–common with this kind of equipment–to force the components of the machine apart.

Classic Vulcan offshore pipe cap; this photo is from 1978. Vulcan preferred a “beehive” or “female” cap. The advantage was the more direct transfer of force; the disadvantage is that the steps had to be custom machined (or shimmed) to the pipe inside diameter. Peeking out above the cone is the top plate; the welding bottles are actually behind the cap. Below the top plate the cushion material was placed.

Not all field work took place after the sale; much of it involved remote production and quality control. This casting was inspected at the foundry by the webmaster in September 1996; it was rejected for (among other things) the crack shown below. Foundry quality control and delivery were Vulcan’s greatest challenges in the production of its product.

Not all service calls were carried out by the field service personnel: Pem Warrington, Executive Vice President (in the red shirt) talking with Art Anderson, metallurgist with Blaw-Knox foundry during a field repair of a 5150 hammer for Brown and Root.

What they’re looking at: the repair of a crack in the fillet of a cylinder by Hogan, Blaw-Knox’s welder. This kind of repair was unusual; one reason why it could be done was because the 5150 cylinder is steel. Photos taken by the webmaster, who was also on the job. 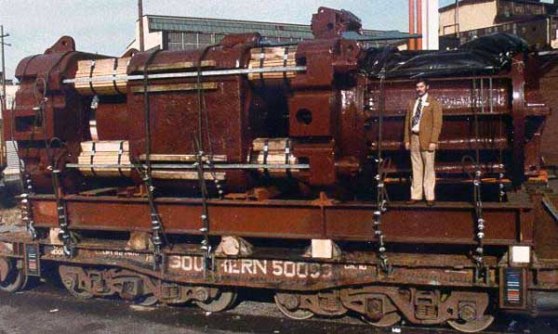 Vulcan 6300, leaving its assembly point, which was the Blaw-Knox foundry in East Chicago, IL. When it was built it was the largest pile hammer made, with 1.8 million foot pounds of rated striking energy. The hammer itself weighed 575,000 lbs. Standing on the rail car (and dwarfed by the hammer) is Norris Tremmier, Vulcan’s Chattanooga-based field service representative until 1981. The major castings for the hammer also came from Blaw-Knox; although for this hammer remote assembly was necessary for size reasons, much of Vulcan’s product was farmed out for a variety of reasons, delivery usually being the most critical.

Finding out what’s good: William C. “Bill” Harrison moves through OPI’s Singapore yard in late 1992 on a hammer fleet inspection. Such field inspections are useful to determine what equiment is good, and also to verify that there are enough spare parts to support the hammers. In some cases inspections were demanded by the oil companies. Harrison was Vulcan’s field service representative from 1981 to 2002.

One thought on “Service: “Have Hammers, Will Travel””