Amtech represents several well known manufacturers and service companies primarily in the oil and gas and mining industry in The People’s Republic of China. We have been quite successful in China over the past six years and have offices in Houston and Peking.

It is difficult for us to get complete and accurate information for quotes and this time is no exception. We have requested additional information but to be expedient, I believe we should make the quote with the information we have.

Once the quote and technical material is received, it will be studied by the end users and possibly have some questions forthcoming. The next step is to invite us and a technical team from your company to Peking for technical and commercial discussions. At these discussions, all equipment details and requirements will be worked out and the contract signed for future delivery. The Chinese are not frivolous. They will not invite you unless they plan to buy.

The quotes including all technical material and specifications available should be enclosed in 12 separate packets (the more technical information available the better). They love hard reading. Make the quote to:

Mail the original quote and all copies to our Houston office and we will forward to our Peking office by air packet for distribution to the Chinese. The Chinese are good bargainers. It is wise to add 5% to gracefully give away in contract discussions as a discount.

Just quote one complete unit of each with all accessories. The Chinese can multiply by number of units desired.

Overseas packing must be good and a line item of a certain percent must be added for this, as well as your costs for handling and inland freight to point of ocean shipment. I assume this port would be New Orleans or Houston, or other if you prefer shipment FOB vessel. The quote should also be valid for six months and priced firm through delivery.

Also for your review, I have attached a copy of the “Machimpex” standard contract form which will be used to attach to your quote and also as an attachment to the contract. It is simple and none of our clients have had problems with it. We modify it somewhat by adding your bank for the Letter of Credit and stating L/C is to be opened 30 days prior to shipment and held open 30 days after shipment is effected for collections. Arbitration can be changed to Sweden or Canada, if required.

Amtech’s role will be to present, discuss and promote the proposal, lead you through technical and commercial discussions, make any changes required in the contract, accompany your people, and expedite everything through delivery and start up until sign off on the contract…

“Amtech” is short for American Technology, based in Houston, Texas. The letter came from Stan Mills, its Managing Director. Subsequent experience proved that everything Stan stated in the letter was absolutely correct. Vulcan had had experience with many different foreign representatives and agents, but Amtech (and subsequently ATI) was among the best. Much of that was due to its personnel; some of these have had distinguished careers subsequent to this transactions, such as:

To fully understand the letter, we need to define and explain a few things.

The last point became the major issue in preparing our quotation. As we would elsewhere in this relationship, we stretched ourselves beyond our usual way of doing things. However, that had some practical limits, as I mentioned to Stan in my reply of 15 January 1981:

Turning to the offer itself, we have given considerable thought to just what we can include in the offer given the information that we have. You will note that the manifold that Mr. Hasenkampf mentioned has been deleted, along with other piping and valving supplies that would appear either in the boiler feed line or in the hammer feed line. We have done this to avoid any difficulties in supplying what is essentially barge plumbing. Barge configurations and methods of installation vary considerably. Nevertheless, we do not feel that this will prove a major obstacle since none of our other customers, either American or otherwise, have experienced serious difficulty with this hardware.

One item that we have included that Mr. Hasenkampf did not mention was the steam line oiler. This is a very important item in the operation of the hammer and we felt that in this case that offering this piece of equipment will prove beneficial to all parties involved.

At the same time we presented our quotation to the Chinese through Amtech’s office in Beijing. As promised, we included the following:

The hammer quotations included lengthy spare parts lists, necessary because a) the derrick (construction) barges frequently operate in remote areas, where it is difficult to get parts in and b) have a high hourly operating cost which makes breakdown and idleness very expensive.

Our normal practice in hammer package quotations was to present a lump sum price at the end. This is the first thing the Chinese objected to; they wanted a breakdown. So, on 4 February, we presented a revised quotation with this change (A sample of our quotations can be seen in Appendix 1 of the contract, which will be presented later.)

The Chinese studied our revisions. Then things started to move very quickly. On 4 March, Ian Stones telexed us with a number of urgent questions from the end user. Our Houston office responded on 5 March (the all-caps format is standard with the telex.)

1) THIS IS TO ANSWER YOUR QUESTIONS AND SUPPLY YOU WITH SUPPLEMENTAL INFORMATION ON OUR OTHER SERVICES.

2) A SMALLER BOILER COULD BE USED BUT TAKING INTO CONSIDERATION BOILER LOSSES OVER A PERIOD OF TIME OUR CLIENT WOULD ONLY END UP PURCHASING A NEW BOILER SOONER THAN NECESSARY. THIS IS AN ATTEMPT TO HELP THE CHINESE PLAN AHEAD AND SAVE SOME MONEY IN THE LONG TERM USAGE… (Note: we ended up reducing the boiler size anyway, without a problem.)

3) VULCAN IRON WORKS AND JOHNSTON BOILER ARE PREPARED TO SEND REPRESENTATIVES TO CHINA TO ANSWER ANY TECHNICAL QUESTIONS THE CHINESE MAY HAVE REGARDING HAMMERS AND BOILERS.

4) THE ELECTRIC SUPPLY THAT YOU HAVE MENTIONED (380 VOLT 50 HERTZ) IS AVAILABLE AT AN EXTRA COST OF 778 US DOLLARS.

5) YOU MAY WISH TO MENTION TO THE CLIENT ABOUT OUR FIELD SERVICE. VULCAN HAS FIELD ENGINEERS THAT ARE HIGHLY TRAINED AND HIGHLY COMPETENT TO RENDER SERVICE AND ACTUAL HAMMER START-UP. THEY WILL ALSO BE ABLE TO ASSIST THE CHINESE ON PROPER HAMMER MAINTENANCE AND OPERATING PROCEDURE. THESE SERVICES ARE AVAILABLE AT ANY TIME.

6) THE CLIENT MAY FURTHER BE INTERESTED TO KNOW THAT VULCAN IS THE OLDEST MANUFACTURER OE THE AIR/STEAM HAMMER…OUR COMPETITORS ARE CAPABLE BUT IN THE LONG RUN WE HAVE THE REPUTATION OF MANUFACTURING THE MOST RELIABLE IN ACTUAL USAGE AND RELIABILITY IN AFTER SALES RELATIONS. OUR HAMMERS ARE ON 75 PER CENT OE ALL DOMESTIC PLATFORM INSTALLATIONS. VULCAN SERVICES ALL MAJOR US COMPANIES ALMOST EXCLUSIVELY AND MANY FOREIGN CONCERNS

Ian’s response the next day was as follows:

MET W/HE PING TIAN AND HE ZHENG – THEY WANT VULCAN AND JOHNSTON MEN OVER HERE AS QUICKLY AS POSSIBLE, SINCE THEY ARE KEEPING JAPS WAITING AND JAPS ARE CALLING EVERY DAY.

EQUIPMENT TO BE INSTALLED ON 800 TON FLOATING BARGE.

WANT TO HAVE IN-DEPTH TECH DISCUSSIONS TO CLARIFY THE FOLLOWING:

FOR BOILER:
WATER QUALITY REQUIREMENTS
DOES IT NEED SOFTENER?
WATER, OIL ELEC REQUIREMENTS
CONTROLS/VALVES, ETC.
IS THE STEEL GRADE SAME AS THEIR CHINESE GRADES?
IF SO, CAN THEY WELD JOINTS! (IF SO, PLS BRING WELDING INFO)

PLS GET US NAMES AND THEY ARE HOPING TO SEND VISA AUTHORITY TO AMTECH HOU BY NEXT TUES.

WILL NEED TO BE PREPARED FOR ALL TECH QUESTIONS AND CONTROLS. THIS WAS ALMOST SIGNED WITH JAPANESE BUT VULCAN’S QUICK REPONSE TO QUESTIONS HAS GIVEN US CHANCE. JAPS HAVE HAD 2 TEAMS OF PEOPLE IN TIANJIN IN LAST YR. MTGS PROBABLY IN TIANJIN WHERE THEY CAN SEE CRANE BARGE…

At this point, we had a corporate version of “battle stations.”

The first question was simple: whom do we send? It was obvious that the usual salesman wouldn’t do. We needed some technical fire-power along with commercial savvy. So we ended up with three people. 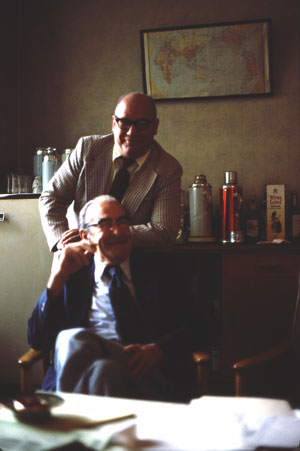 Out of the shadows came Jesse Perry (seated) and Lloyd Berwald. Jesse was Vulcan’s most experienced field service person, who also had good customer relations skills along with an extensive knowledge of the product. Lloyd was Jesse’s counterpart at Johnston Boiler. His role was important, because it was obvious that the boiler was a big deal with the Chinese.

Myself, at the Summer Palace in Beijing. At the time I was President and Chief Engineer of Vulcan. The main burden of the commercial side fell on me, along with some of the technical side.

Getting our visas was a little tricky because China’s consulate network wasn’t the largest. Fortunately they had one in Houston (importance of oil?) and my brother Pem could shuttle my passport down there. China’s visa application form was interesting; it was the first time on such a form that my political party and religion were queried. Once my passport was stamped with the Chinese visa, we realised that in our panic they had stamped a passport that was about to expire. So I obtained a new passport, only to have both old passport and Chinese visa cancelled simultaneously. Fortunately the Chinese consulate was understanding and I departed for China with new passport and visa. (This was the same Chinese consulate where, the same year, the Chinese ballet dancer Li Cunxin was detained for 21 hours in the process of defecting to the US; his life is the basis for the movie Mao’s Last Dancer.)

We made whatever preparations we could, armed with some knowledge but never enough. Vulcan had conducted a good deal of export business before—we generally exported about a third of our output—but no quotation had gone quite like this.

At that time, about the only way to get to Beijing from the US was first to go to San Francisco, fly to Tokyo, lay overnight, and then proceed to Beijing either by JAL (Japan Air Lines, if you valued your life) or by CAAC (Civil Aviation Administration of China, if you didn’t.) As I settled into my two long flights, first transcontinental and then transoceanic, I both left behind an active situation at home (Vulcan was undergoing some substantial management changes at the time) and faced a completely novel one at my destination.

3 thoughts on “A Fistful of Yuan 2: The Road to Beijing”