Most of our fluid mechanics offerings are on our companion site, Chet Aero Marine.  This topic, and the way we plan to treat it, is so intertwined with the history of Vulcan’s product line that we’re posting it here.  Hopefully it will be useful in understanding both.  It’s a offshoot of Vulcan’s valve loss study in the late 1970’s and early 1980’s, and it led to an important decision in that effort.  I am indebted to Bob Daniel at Georgia Tech for this presentation.

Basics of Compressible Flow Through Nozzles and Other Orifices

The basics of incompressible flow through nozzles, and the losses that take place, is discussed here in detail.  The first complicating factor when adding compressibility is the density change in the fluid.  For this study we will consider only ideal gases.

Consider a simple orifice configuration such as is shown below.

At this point we need to state two modifications for this equation.

First, we need to eliminate the density, which we can do using the ideal gas equation

Second, we should like to convert the mass flow rate into the equivalent volumetric flow rate for free air.  Most air compressors (and our goal is to determine the size of an air compressor needed to run a test through this valve) are rated in volumetric flow of free air in cubic feet per minute (SCFM.)  This is also the basis for the air consumption ratings for Vulcan hammers as well, both adiabatic and isothermal.  This is accomplished by using the equation

Making these substitutions (with a little algebra) yields

In this article the coefficient of discharge

is discussed.  It is also the ratio of the effective throat area to the total throat area, or

We are basically considering the energy losses due to friction as an additional geometric constriction in the system.

One final–and very important–restriction on these equations is the critical pressure, given by the equation

As you can see, this is strictly a function of the ideal gas constant.  It’s certainly possible to get around this using a converging-diverging nozzle, but most nozzles, valves or orifices are not like this, and certainly not a Vulcan 06 valve.  We now turn to the analysis of this valve as an example of these calculations.

The first thing we should note is that pile driving equipment (except that which is used underwater) is designed to operate at sea level.  Using this calculator and the standard day, free air has the following properties:

Now let’s consider the valve for the 06 hammer (which is identical to the #1 hammer.)  A valve setting diagram (with basic flow lines to show the flow) is shown below.

Note the references to steam.  Until before World War II most of these hammers (along with most construction equipment) was run on steam.  With its highly variable gas constant and ability to condense back to liquid, steam presented significant analysis challenges for the designers of heavy equipment during the last part of the nineteenth century and the early part of the twentieth.  For our purposes we’ll stick with air.

There are two cases of interest:

According to the vulcanhammer.info Guide to Pile Driving Equipment, the rated operating pressure for the Vulcan 06 at the hammer is 100 psig = 14,400 psfg = 16,516.22 psfa = 114.7 psia.  For simplicity’s sake, we can consider the two cases as mirror images of each other.  In other words, the upstream pressure in both cases is the rated operating pressure.  This should certainly be the case during air admission into the hammer.  For the exhaust, it should be true at the beginning of exhaust.  Conversely, at the beginning of intake the downstream pressure should be atmospheric (or nearly so) and always so for exhaust.

From this and the physical characteristics of the system, we can state the following properties:

At this point calculating the flow in the valve should be a straightforward application of the flow equations, but there is one complicating factor: choked flow, which is predicted using the critical pressure ratio.  For the case where

27.84 psia = 13.14 psig.  This isn’t very high; it means that it doesn’t take much pressure feeding into the atmosphere to induce critical flow.  It is why, for example, during the “crack of the exhaust,” the flow starts out as constant and then shortly begins to dissipate.  The smaller the orifice, the longer the time to “blow down” the interior of the hammer or to fill the cylinder with pressurised air.

60.59 psia = 45.89 psig.  This means that, when the cylinder is pressurising at the beginning of the upstroke, the cylinder pressure needs to rise to the critical pressure before the flow rate begins to decrease.

We will concentrate on the latter case.  If we substitute everything except the downstream pressure (expressed in psia,) we have 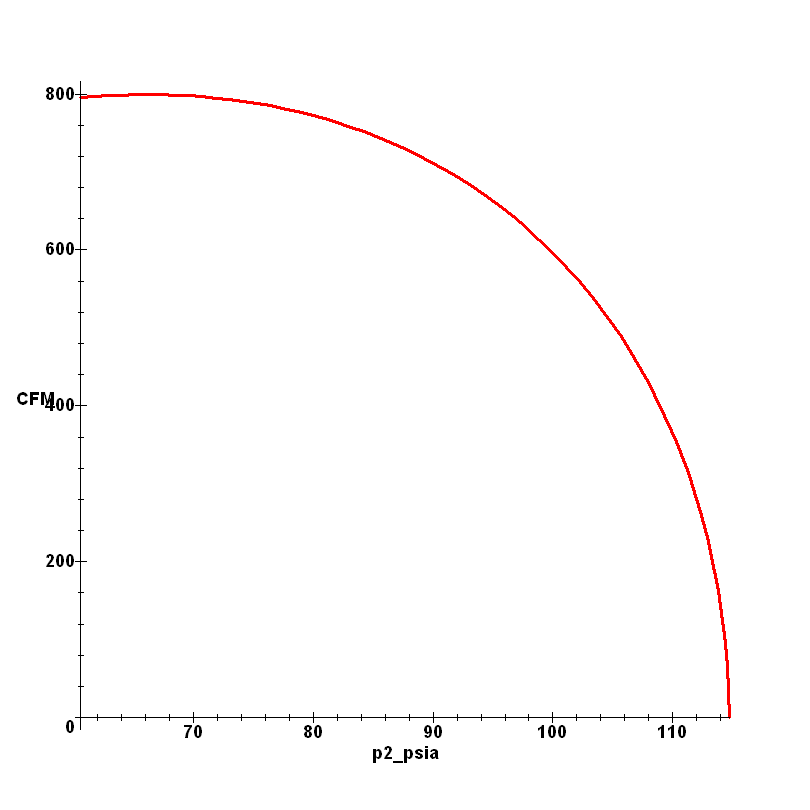 As noted earlier, when air is first admitted into the cylinder the flow is constant.  Once the critical pressure ratio is passed, the flow drops until the two pressures are equal.

It was this large volume of flow which prevented the use of the 06 valve (which could have been separated from the cylinder using a valve liner) in the valve loss study.  The smaller DGH-100 valve was used instead.

It is interesting to note that the rated air consumption of the hammer is 625 cfm.  This is lower than the instantaneous critical flow.   Although on the surface it seems inevitable that the hammer will “outrun” the compressor, as a further complication the hammer does not receive air on a continuous basis but on an intermittent one.  For much of the stroke the compressor is “dead headed” and no air is admitted into the cylinder from the compressor.  To properly operate such a device, a large receiver tank is needed to provide the flow when it is needed.  The lack of such large tanks on modern compressors is a major challenge to the proper operation of air pile hammers.

2 thoughts on “Compressible Flow Through Nozzles, and the Vulcan 06 Valve”